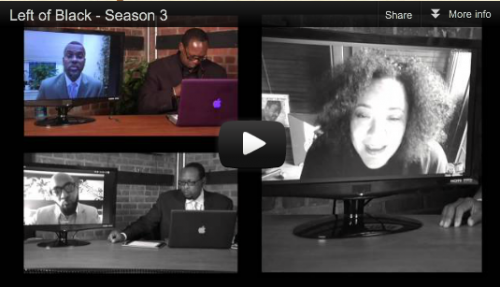 “When you hear the terms ‘new technology’, ‘digital humanities’, and ‘black studies,’” tells Duke Professor Mark Anthony Neal on his web series Left of Black, “it’s almost as if its an oxy-moron.”

Neal is Professor Black Popular Culture in the Department of African and African-American Studies at Duke University and the host of a weekly webcast, Left of Black. On the season premier of its third season, Left of Black tackled the uncertain relationship between Black Studies and digital humanities – a relationship that is at once precarious and filled with potential. The conversation was enriched by the contributions of two young scholars who are charting new terrain in the field of Black Studies and digital humanities: Howard Rambsy II, Associate Professor of English Language and Literature and Director of the Black Studies Program at Southern Illinois University at Edwardsville, and Jessica Marie Johnson, a Post-Doctoral Fellow in the Richards Civil War Era Center and African Research Center at Penn State University.

According to these experts, digital humanities present Black Studies scholars – as well as other scholars studying the experiences of people of color – with a double bind. One the hand, some Black Studies departments have been resistant to embrace the possibilities of emerging technologies, new media, and digital platforms in their work. University departments everywhere tend towards a kind of institutional inertia that, ironically, encourages fierce competition for the cutting edge in research while maintaining and defending “traditional” structures like tenure, disciplinary boundaries, and the traditional academic publication system. As Neal puts it, “on the one hand, if we look at Black Studies proper, the fact is it’s a field that continues to be driven by older scholars [who are] still very much tied to a 1960s style Black Studies model.” In a demonstrative moment of generational critique 2.0, Neal diagnoses the problem: “These folks are still on the listserve.”

On the other hand, Universities are often slow to recognize the ways in which “race” factors in the digital humanities, while ignoring or sequestering the distinctive digital humanities projects created by Black Studies scholars.

“When all these deans and provosts are looking around for folks who are going to be doing the cutting edge work [in digital humanities], the last folks they look for are black folks. Black folks don’t do technology, right?” Neal explains.

We have to move “beyond normative ideas of who is a digital humanities scholar,” says Johnson, “which has been imagined as a white, male academic. And it’s really not. There are ways that we as people of color and people of all kinds of identities are very engaged with what’s happening in technology right now, but are not necessarily having that conversation in the digital humanities space.”

Not only must Black Studies scholars working in digital humanities confront the stereotype that African-Americans are uninterested or unskilled in technology, they must also continue the struggle that Black Studies scholars have felt for decades: educating the public on the relevance, importance, and centrality of Black Studies in the larger liberal arts paradigm. (And if there are still doubts that this struggle continues, this recent Chronicle of Higher Education controversy should lay those doubts to rest.)

“Even when you have folks who do [digital humanities], they’re never included in those conversations, because – let me just be frank – it’s just ‘black shit,’” Neal says. “It’s never integrated into what the folks do in the mainstream University, even as the mainstream university is going forward with this idea of digital humanities.”

Part of the solution, according to Johnson, is to highlight, promote, and celebrate the contributions to digital humanities research by Black Studies scholars and people of color. Projects such as the Black Gotham Archive and Diaspora Hypertext are fine examples. In the realm of pedagogy, Black Girls Code confronts the dearth of African-American women in science, technology, and math while transforming how we think about “access” to new technologies. In the realm of cultural production, The Mis-Adventures of Awkward Black Girl is transforming not only “Black television” but the entire universe of television in a digital age.

According to Neal, digital humanists in Black Studies are “educating these institutions that, not only are we using this technology in very interesting and productive ways, but… we’re actually using it in cutting edge ways that has a great deal to teach the university about how to do digital humanities.”

That being said, it is not the sole responsibility of Black Studies scholars to demonstrate the relevance of race to digital humanities. We must all do our part. Indeed, to the extent that digital humanities research tells us something about how society interfaces with technology, an appreciation of racial dynamics in digital spaces is fundamental to our understanding of digital humanities.

As Johnson explains, the same structures we find in the print world get replicated in the digital realm. Even though most people recognize the potential to create Internet spaces that are more egalitarian, open, and diverse, the reality is that structures of race, gender, sexuality and class operate there, too.

“This is where black studies can enter the digital humanities realm in a critical way,” says Johnson. Black Studies is particularly qualified to make scholarly interventions into this area by virtue of its historically strong critical apparatus vis-à-vis these structures. But all of us interested in digital humanities should be charged with recognizing and appreciating the race, gender, class, and other power structures that shape these tools and spaces. Just as the “archive” is now recognized to be problematic with regards to race and gender, so should we be critical in our usage of technology, especially as the Internet becomes more and more commercialized.

This is not to say that digital tools and spaces are useless to Black Studies scholars and those working to interrogate power structures in our society. Indeed, all the contributors to the discussion on Left of Black acknowledge the potential of the Internet and new media for new knowledge production and critique.

The challenge Black Studies scholars face, according to Howard, is the same one facing so many in the digital world: how to produce quality content that is centralized enough to provide a cumulative critical apparatus, as opposed to a flurry of unorganized memes. As Neal puts it: “The irony is that there was a real critical apparatus 50 years ago when folks didn’t have access to publishing houses they way we do, no internet. Now we have access, we can publish anything we want at any time, but yet we find ourselves hamstrung to actually speak back critically at what we’re producing.”

Considering the impressive history of prolific publishing and content creation by their forbearers in the analog world, digital humanists in Black Studies have big shoes to fill. As they continue to innovate in digital humanities, scholars outside of Black Studies will have much to learn.

Rochelle Terman is a Graduate Student Researcher at the Townsend Center for the Humanities. She is pursuing a Ph.D. in Political Science.