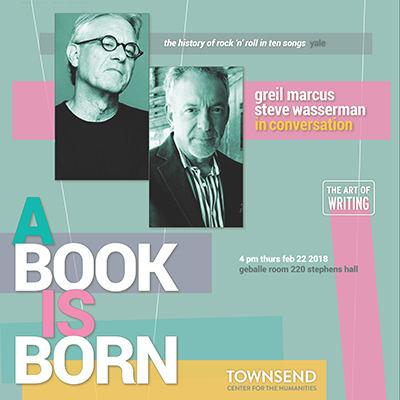 The Art of Writing is a program run by the Townsend Center that helps undergraduates enhance their writing skills and graduate students become strong teachers of writing. The program hosts several events throughout the year, including a recent conversation called “A Book is Born.” The discussion featured Berkeley alums Greil Marcus, a music journalist and cultural critic; and Steve Wasserman, a publisher and editor. Their conversation explored their entwined lives as writer and editor.

The pair first met at Berkeley in 1971. Marcus was a graduate student called in to teach an American cultures course in which Wasserman, an undergraduate at the time, was enrolled. It was a unique time to take an American cultures course at Berkeley, as it was only a few years after the Free Speech Movement. Recently-graduated students had gone into the world to achieve what they had not been able to in the classroom, and many of the students in Marcus’s class were frustrated, feeling that the political momentum of the 1960s on campus was over. Wasserman in particular felt the need to immerse himself in American cultural and political history and was drawn to Marcus’s own writings, which engaged pressing debates about major social, political, and cultural forces.

The course was a turning point for Marcus, as he absolutely hated teaching the class. He grew to feel that the life of a professor was not for him, and he turned instead to writing, a field in which he proceeded to enjoy much professional success. For his part, Wasserman loved writing but felt he lacked the voice to become a compelling author. After college he turned to editing, eventually landing a job as an editor at the LA Times. He had been following the career of his former teacher; when John Wayne lay sick and Wasserman was charged with finding someone to write Wayne’s obituary, he called upon Marcus, feeling his former teacher would be perfect for the assignment.

Wasserman proceeded to hold a variety of editorial posts at major publications and presses (the LA Times Book Review, Basic Books, and Yale University Press) for which Marcus wrote articles and books. Wasserman frequently served as the ideas man, pitching article and book ideas to Marcus, who was then able to take these ideas and run with them. Their years of working together have given the pair unique insights into the complex and collaborative relationship between editor and writer.

Wasserman and Marcus’s most recent collaboration is The History of Rock ‘n’ Roll in 10 Songs. At Yale University Press, Wasserman reached out to Marcus with the idea of writing a history of rock and roll. Marcus initially dismissed the idea, feeling it had already been done brilliantly many times. But after some thought, Marcus was able to turn Wasserman’s general idea into a specific and compelling angle on music history. Though writers are frequently seen as the creative side of the writer-editor duo, editors can often be instrumental in igniting a spark in the writer.

Conflict can, of course, emerge between writers and editors — about which Wasserman had a lot to share. Truly gifted writers, he noted, have a distinctive voice and style that may conflict with the editor’s own personal tastes. As an editor, Wasserman says he has always tried to be aware of his own biases and limit his censorship of the writer’s voice. Writers are frequently told that the editor is always right, but Wasserman contends that a good editor knows when to leave the writer alone. His strong belief in this principle became evident when he pitched one of Marcus’s book projects, “Lipstick Traces,” to the publishers at Basic Books. Despite overwhelmingly negative comments from his boss at Basic Books, who found the manuscript’s style and ideas difficult to follow, Wasserman believed strongly in the manuscript and eventually found a publisher at Harvard University Press who felt the same.

Wasserman and Marcus share a special relationship founded on mutual respect and a deep understanding of each other’s work. What makes the duo so successful is their long connection and strong history of intellectual collaboration. Throughout their years together, Wasserman has acquired an intimate knowledge of Marcus’s voice and approach, while Marcus is fully comfortable taking suggestions from Wasserman and making them his own. Creation of writing is not the process of one individual, but a collaborative endeavor that requires conviction, empathy, and the entwining of two complementary minds dedicated to a single project.