The Book as Place

The Book as Place 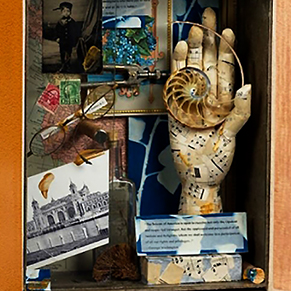 Located in the Environmental Design Library in Wurster Hall, a semester-long exhibit titled The Book as Place displays works of art, writing, and physical material that speak to built environments both presented through and explored by books. The exhibit questions what a book is and how it can explore important messages differently in space and place. It does this by tackling the traditional idea of a book as bound pages of printed text and presenting disassembled and reconstructed versions of this form. Many of the objects take abstract approaches to both their texts and visual presentation. Some of the books have cut-outs or differently-shaped pages, some look like maps, and some appear as containers presenting information in three dimensions. The 25 featured artists investigate topics ranging from homelessness to memory and beyond, showcasing their ideas not just through traditional literature, but through visually and physically intriguing projects.

There are two display cases in the Environmental Design Library, both of which are full of color, structure, and new ways of presenting words. One container-style piece is a vibrant display titled A Commuter by Asa Nakata. In it, three trays are propped open to showcase “different landscapes of a reverie that occurs daily for a commuter during their travels: a train window, a busy road, a passing street.” In each tray, there are also paths for a small metal ball – meant to represent the commuter – to travel as if through a maze. One piece of writing on the inside cover of one of the trays reads, “You face a large group of people traveling from one place to another, and suddenly you feel alone. Is this the reality or are you actually daydreaming the moment?” The piece brings up questions of identity in the physical world and in human life, making it an ironically applicable piece to the university in which it is housed.

Some of the other container-style books in this exhibit also comment on words themselves. Wayfinding by Julie Chen – the exhibit’s curator – focuses on the relationship between the physicality of books and the reader’s experience. The large, dark, box-like structure includes three-dimensional paper sheets and alphabets to reflect a transformation from a visual reading experience to one that involves sight, sound, and touch via interaction with the book’s pages. To complement this physical interpretation of words, part of Wayfinding’s text reads, “At what point does a sound transform into a word or a gesture transmute into a recognizable unit of physical language? Each syllable, each movement is meaningless on its own, but infused with purpose when connected to form an intentional phrase that can be received and understood by another.” Presented within the diorama itself, this quote provokes reflection on the oddities of human communication.

Dwellings by Rhiannon Alpers investigates similar ideas, both in its content and form. This book-box combination of paper structures — inspired by hummingbird nests and seed pods — serves to invoke the different physical and emotional environments in which one dwells throughout one’s life. Dwellings’ comment on words comes from a piece of text on thin paper inside the box, which reads, “Words begin as description. They are prismatic, vehicles of hidden, deeper shades of thought. You can hold them up at different angles until the light bursts through in an unexpected color.” This quote comes from Susan Brind Morrow’s travel autobiography The Names of Things, and Alper’s use of it connects words to the powerful ability of physical and emotional environments to shift one’s perspective.

On the other hand, some displays in The Book as Place tackle current events, including topics like immigration in America, homelessness in Portland, and housing vulnerability in Hurricane Alley. One of the most striking pieces is Landscapes of the Late Anthropocene by Philip Zimmerman. This book is composed of dystopian images that present a world in which the sea level has risen by two hundred feet. Those parts of civilization that have not died off live “in armed and guarded towers, growing their food in vertical farms inside these towers.” The cautionary tale against climate change is loud and clear, amplified further by a piece of writing that is printed on one of the book’s darkly futuristic images.  “A rag will soak up spilled water. North winds bring colds and fevers. This plank was made for walking on.”

The Book as Place brings together ideas from academia, art, and society, culminating around the act of reinterpreting how books convey imagery, commentary, data, and the like. Books are not just points of departure for these artists – to be a book means to both house an idea and to be an idea, which is especially meaningful considering that this exhibit is located in an architecture library. Within the display, the idea in question and the mode of exploring it are up to the artist, leaving room for a variety of interpretations and opinions. Still, it is this variety that makes The Book as Place so thought-provoking, and the range of physical constructions and topics guarantee an insightful experience for viewers.