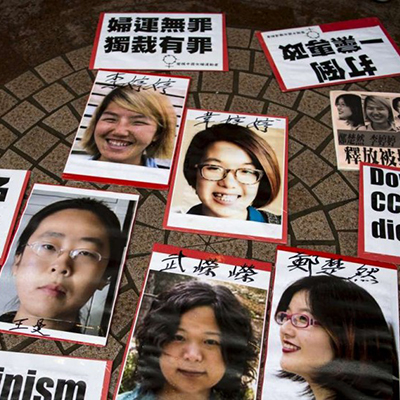 On February 1, the Center for Chinese Studies at UC Berkeley hosted a book talk featuring journalist and scholar Leta Hong Fincher in conversation with Chinese feminist and activist Lü Pin. Hong Fincher began by discussing her 2018 book Betraying Big Brother, which highlights how feminist movements will be instrumental to shaping the politics of gender equality in China’s future

Hong Fincher started by discussing her inspiration for Betraying Big Brother. She was the first American to receive a PhD from Tsinghua University in Shanghai, China, where she wrote her thesis on the relationships between housing conditions and gender inequality in contemporary China. She was moved to write a book about feminism when Chinese activists were arrested for planning to hand out stickers about sexual harassment before International Women’s Day. Five women, now known as “The Feminist Five,” were jailed for 37 days, and were only released in response to global outcry against the Chinese government for its sexist violation of women’s rights. Betraying Big Brother features interviews with The Feminist Five and other feminist activists who shed light on how the movement resists China’s authoritarian regime.

So why were The Feminist Five incarcerated? To give context, Hong Fincher spoke about the history of gender inequality in China. During the Chinese Revolution of 1949, the communist advocation of gender equality encouraged more women to support the movement. However, as expectations of women to both work and perform domestic labor grew, communist propaganda increasingly subjugated women in order to promote a normative patriarchal family structure. In their propaganda, the government linked a harmonious family to a harmonious society, both of which they hoped to maintain in order to consolidate power. Hong Fincher criticized this practice and its effects on women while exemplifying how widespread patriarchal norms are employed in the family. For example, a hip hop song features Chinese President Xi Jinping as an ideal masculine husband, showing patriarchal masculinity to be intertwined with national ideals.

Chinese gender inequality extends beyond gender roles between men and women, meshing social norms with family dynamics in the government’s propaganda around birth rates. Hong Fincher explained how the government targeted specific women with pro-natalist propaganda, which stemmed from fear of falling birthrates. College educated women were encouraged to have more children, while women from more ethnically diverse areas like Xinjiang or women of lower socioeconomic status were discouraged from reproducing. As Hong Fincher suggested, such propaganda is harmful to women in two ways. First, it reveals how the government sees women as nothing more than reproductive objects. Second, it shows how the government segments their population into superior and inferior along ethnic, economic, and geographic lines. This targeting, along with the propaganda mentioned earlier, proves Hong Fincher’s point: patriarchy is at the center of the Chinese government’s ability to control their population and to maintain authoritarianism, from the beginning of the Chinese Revolution to the present day.

Nevertheless feminist movements continue to flourish in China despite the obstacles activists face. The 2015 arrests of The Feminist Five were a shock, especially given the successful and undisturbed feminist events in 2012 such as the Bloody Brides protest and Occupy Men’s Toilets protest. The 2015 arrests galvanized the feminist community, both domestically and internationally. The movement has since encountered obstacles online; the most influential feminist social media account — run by panelist Lü Pin — was shut down by the Chinese government in 2018. Still, Hong Fincher claims that the Chinese feminist movement’s resilience may make it one of the most transformative social movements in China’s history. Its drive, adaptation, and  faith in the future of gender equality renders the movement a force to be reckoned with.

After her presentation, Hong Fincher was joined by Pin to answer questions that regarded a range of topics, from gendered economics to Chinese feminist social media. Many questions centered on both Hong Fincher and Pin’s lived experiences with Chinese gender inequality. For example, some of the faculty at Tsinghua University discouraged Hong Fincher from pursuing the topic of gender in her PhD program. Pin spoke to broader issues of gender discrimination, such as the idea that women are reproductive tools and the gendered economic oppressions that are still apparent in China today. When asked what role men can play in feminism, Pin stated that men have been talked about enough in human history, and that their importance within the fight for gender equality doesn’t always need to be discussed.

An inspiring point that Hong Fincher touched on near the end of the conversation was the experience of interviewing the Feminist Five for her book. In her interviews, she was inspired by hearing about their sacrifices, and she understood that despite the hostile environment feminism faces in China, these activists are determined to continue fighting. In the end, she did not want history to erase the efforts of these brave women. As this talk indicated, the Chinese government is a cruel and slowly-changing opponent. The likelihood of gender equality in China being realized in their lifetime is slim, but these women still strive to fight ruthlessly for change.