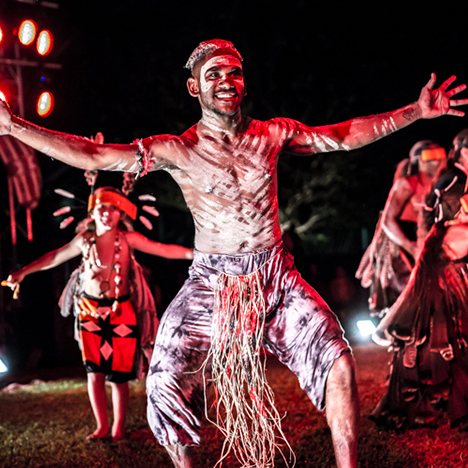 Over a year ago, in the summer of 2019, Indigenous dancers from the Yidinji Nation in Cairns, Australia, and from the Northern Pomo Tribe in Redwood Valley Rancheria, California, came together on the Ohlone Homelands (currently the Berkeley campus) to perform a dance entitled Bayal Kaymanen. The name of the performance combines a Yidinji word bayal and a Pomo word kaymanen, and means “Dancing Smoke.” The performance explored stories about fire from both the Yidinji Nation and the Northern Pomo Tribe in the hopes of raising awareness about two of the oldest living cultures.

On February 1, 2021, Pauline Lampton, director of Miriki Performing Arts and member of the Yidinji Nation, Corrina Gould, co-founder of the Sogorea Te’ Land Trust, and Erica Estrada, a Northern Pomo dancer — all of whom were instrumental in bringing this collaborative dance performance to life — reunited over Zoom to reflect on Bayal Kaymanen. This discussion, “Performing Cultural Exchange on Ohlone Homelands in Huichin,” part of the Arts & Ideas series run by BAMPFA, considered what the event had taught about cultural exchange.

After founding Miriki Performing Arts in 2012, an effort to keep her nation’s culture vibrant through contemporary dance, Lampton saw immense potential in connecting with other Indigenous peoples. She visited the Northern Pomo Dancers in the Bay Area and then invited them to Australia to work on a collaborative performance. The show became Bayal Kaymanen, which connected the tribes through the importance of fire in their respective cultures. Two years later, the show was finally brought to UC Berkeley.

Given UC Berkeley’s history with Indigenous groups in Northern California, the decision to host the performance on the Berkeley campus poignantly connected the dancers with the past trauma of land expropriation. Many Native American tribes, especially the Pomo tribes, in Northern California have a difficult relationship with UC Berkeley. The campus sits on a former Pomo village and burial sites. In spite of federal and state law requiring repatriation, the University continues to store the remains of thousands of Indigenous bodies in drawers beneath the Hearst Gymnasium. Many other culturally significant objects continue to be held in the Phoebe Hearst Museum.

For Gould, performing Bayal Kaymanen at a place where so many ancestors are not at peace is an important step in the healing process: it meant gaining recognition from and establishing connections with an institution that previously, and in some ways continues to, contribute to the displacement of Indigenous people. The dance was also a way to soothe the ancestors, allowing them to hear their traditional language and stories and feel the traditional dances. Reciprocally, the performers felt the power of being in proximity to the ancestors.

Although the performance was not designed with an overtly political message, Lampton, Gould, and Estrada all felt that the event was a way to reassert their cultures’ continued presence, despite past colonial and ongoing neocolonial efforts to erase their identity. The opportunity to perform these dances at a public university has a redoubled significance: the US federal government once outlawed the public performance of Indigenous dances. Estrada, whose sons performed in this event, is proud that her children could see that their culture is more than relics in the UC Berkeley archives.

In spite of their different cultural customs, the dancers of the Yidinji Nation shared with the Pomo Tribes their strong attachment to ancestors and ancestral homeland, their perseverance in the face of their colonial past and neocolonial present, and their own connection to the Pacific Ocean. For both groups, the experience was particularly meaningful for the younger dancers, who will carry on the traditions. Forming bonds with other Indigenous youth, they forged intimate connections with a geographically distant culture.

The collaboration between the Yidinji Nation and Northern Pomo Tribes, furthermore, revealed some of the shared difficulties of maintaining traditional protocols in the current urbanized landscape. Gould explained that, for the Yidinji Nation, it is very important to be welcomed onto the land when visiting another group. (One elder travelling with the performing group stressed to Lampton that he wanted to be greeted and welcomed as soon as they got to San Francisco.) For the Northern Pomo Tribes, it is not only customary to welcome visitors onto the land but also to feed them. These cultural imperatives posed some logistical challenges. While the group from the Miriki Performing Arts was still on the plane to SFO, Gould found an In-n-Out burger near the airport to serve as a convenient meeting point and allow the Pomo Tribe to feed the performers.

The two groups also learned important lessons in respecting their unique cultural differences and in experiencing new traditions. For example, in the Pomo Tribe, it is considered disrespectful to touch someone’s regalia. The Yidinji dancers, who do not have a similar custom, had to be conscious of this while moving around a tight dressing room. Lampton spoke of learning to collect and cook seaweed, something not done in Cairns. These moments of cultural exchange, just as much as dancing together, strengthened the bond between the two groups.

At the heart of the collaboration between these Indigenous peoples of California and Australia was the formation of intimate relationships between their cultures. Through their shared love of dance and commitment to the traditions of their ancestors, the Miriki Performing Arts dancers and the Northern Pomo dancers celebrated two of the world’s oldest cultures — their languages, stories, and dances. The two groups will continue to collaborate with different Indigenous tribes and nations as they bring attention to the vibrant performance culture of their communities.