Lines in the Sand or Growing Pains: Stephen Ramsay and the Digital Humanities at the 2011 MLA

Lines in the Sand or Growing Pains: Stephen Ramsay and the Digital Humanities at the 2011 MLA 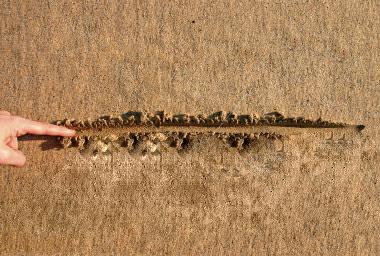 Scanning the post-conference blogosphere, it's clear--as virtually everyone knew would be the case going in--that the digital humanities made quite a showing at last week's MLA conference in southern California.  The DH tent being as big as it is, the panel offerings were numerous and rich and even included a little off-the-menu controversy.  It may be the case, however, that the latter is a necessary byproduct of the former and that for the continued growth and definition of the digital humanities, a little controversy may be just the thing.

For those who skipped the conference, missed panel #309 on the "History and Future of the Digital Humanities", and haven't been obsessively following DH twitter feeds, a little re-cap:  in his allotted three minutes at the aforementioned panel discussion, Stephen Ramsay (Associate Professor of English at the University of Nebraska-Lincoln and a Fellow at the Center for Digital Research in the Humanities) delivered a humorous, insightful, and (I would argue) entirely reasonable position paper aimed at defining just who, in fact, counts as a digital humanist.  On the face of it, that's not a terribly controversial proposition, and it might be that the ensuing brouhaha owes as much to what mayhave been an unfortunate choice of title for Ramsay's paper as it does to anything contained within the paper itself.

A thought experiment:  would people have been so scandalized if Ramsay had delivered his remarks under the title of "What is a Digital Humanist?" rather than "Who's In and Who's Out"--a heading uncomfortably resonant with a kind of cool/uncool sandlot binary that gets a lot of hackles up?  The latter title is a great one for spiking attendance figures at a panel, but it turned out to be a little (over-) loaded in a context defined by two unrelated but unmistakable features:  1) the current, widespread budgetary and funding tensions that make promising plots of intellectual turf particularly dearly held of late and 2) the peculiarly enduring sense that--as Matthew Kirschenbaum put it in an excellent post on the subject--"the digital humanities is somehow unique as a phenomenon in the history of human social relations".  While the noted openness, accessibility, and spirit of collaboration that have been and remain remarkable characteristics of the DH community are ideals worth defending, the idea that that same community wouldn't undergo processes of definition and redefinition with growth and time strikes this writer as unrealistic, unproductive, and unhealthy.

Growth in the field, on the other hand, is a great thing, and definition is a necessary--if sometimes painful--part of it.  Defining just what a digital humanist is or does, as we enter a new decade and see the DH community attracting increased attention and funding, strikes me as an entirely worthwhile enterprise and one that is at the very heart of defining the field and its project agenda.  Coming back to Ramsay, his follow-up post on "building" as the essential act of the new school humanist (humanist faber, if you will) suggests that this is exactly the conversation he was trying to initiate.

It promises to be an interesting and lively one and will no doubt be filled with the curiosity and generosity that are hallmarks of DH discourse.  What's more, I'd argue that it will be a more productive conversation than the digressions on the appearance of status and sub-groupings (I decline to use the word "cliques"), both of which are bound to arise in any vital community that is growing, attracting notice, and responding to new opportunities.