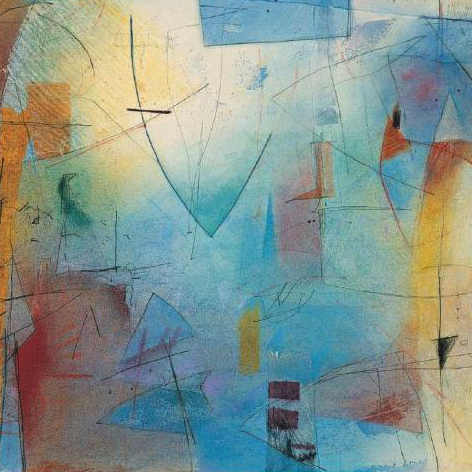 In 2019 Joy Harjo was chosen as the 23rd US Poet Laureate, a position she still holds, making her only the second Laureate to serve for three terms. She is also the first Native poet to hold the honor. This year, 2020-2021, she was invited to hold Berkeley’s Avenali Chair in the Humanities. On February 24th, Harjo joined Craig Santos Perez, professor of English at the University of Hawaii and a UC Berkeley PhD graduate, to discuss Harjo’s latest book, an anthology of Native poetry entitled When the Light of the World Was Subdued, Our Songs Came Through: A Norton Anthology of Native Nations Poetry. The next day, Harjo spoke with UC Berkeley professor Beth Piatote about the evolution of her signature project as Poet Laureate, Living Nations, Living Words: A Map of First Peoples Poetry. Through these two events, Harjo demonstrated her commitment to raising awareness of and appreciation for Indigenous poetry.

A member of the Muscogee Creek Nation, Joy Harjo published her first volume of poems, The Last Song, while she was still an undergraduate at the University of New Mexico. She later went on to earn an MFA in creative writing from the University of Iowa in 1978. In total, Harjo has written nine volumes of poetry, for which she has won numerous awards. She is considered a prominent figure in the Native American Renaissance and her written work draws extensively on the traditions of her ancestors and her personal experiences as a Native woman. Inspired by the oral traditions of her ancestors, she often performs at poetry readings and spoken word events. Beyond poetry, Harjo is an educator, musician, and painter. Her seventh album of original music was released on March 5, 2021.

Harjo’s most recent book, When the Light of the World Was Subdued, Our Songs Came Through, is an extensive compilation of Native poetry over the centuries. In her explanation of how the book came into being, Harjo noted that she had periodically urged W. W. Norton — the company that has published most of Harjo’s own poetry — to create an anthology of Native literature. Eventually the publishers decided that a collection of poetry could be successful and assigned Harjo to lead the editorial team. The task was daunting. Initially, Norton gave Harjo only 300 pages to work with, though she eventually persuaded them to give her 400 pages. With hundreds of years of poetry from a variety of different tribes and nations to choose from, it was a challenging process to select the poems. She was helped by several editors, all of whom were Native poets themselves.

Because such a project had never been undertaken before, Harjo wanted to cover as much geographic and historical ground as possible. The anthology, published in August 2020, features 161 poets across four centuries and represents five geographic regions. These regions make up the sections of the book: Northeast / Midwest, Plains / Mountains, Pacific Northwest / Pacific Islands / Alaska, Southeast, and Southwest. In each section, poems are organized chronologically, allowing readers to see the progression of poetry in each region and move back and forth in time as they read through one section to the next.

Each section of the anthology begins with poems originally transmitted orally. The span of time covered by the volume not only creates a bridge between oral traditions and written poetry, but, as Harjo explained, it embodies “seventh-generation thinking.” This concept originated with the Iroquois Nation and encourages people to make decisions and plans with future generations in mind. As a great-grandmother, Harjo has personally experienced the importance of forming connections across generations and shaping the world for those who will come after her. The inclusion of oral poetry also reflects her sense of the importance of looking back to the past. Early in her poetry career, Harjo realized that she is within a generation of a primarily oral culture, with grandparents who appreciated poetry aurally rather than through reading it on the page. Harjo believes this has made her more in tune with the sound and rhythm of words as she writes her own poems.

Harjo and her coeditors sought to capture a wide range of aesthetics to show the diversity within the expansive community of Native Poets. She rejects the idea that there is “a way to write poetry,” and believes especially in the merit of poetic practices and styles that do not conform to aesthetics rooted in European poetic styles. As an editor, she also did not want to reduce Native Poetry to a few stereotypes and common themes; instead she and her collaborators prioritized displaying the individuality of poets within tribes and nations.

The title of the book comes from a Hawaiian creation chant. For both Harjo and Santos Perez, it reflects the power and influence of poetry during difficult times. As both speakers noted, “when the light of the world is subdued,'' people often turn to poetry as a source of hope and a way to work through both personal and collective challenges. Harjo hopes that this anthology — one of only a few Native poetry collections and the first to cover such a wide chronological and geographic span — is only the beginning, and that later collections of Native poetry will expand to include the entire Western hemisphere.

Harjo’s commitment to collecting and sharing Indigenous poetry is also reflected in her “signature project” as Poet Laureate, a website designed with the Library of Congress entitled Living Nations, Living Words. When she first became Poet Laureate, she had many ideas for a culminating project but knew that whatever she undertook needed to increase the visibility of Native Nations poets and celebrate their diversity and accomplishments. Eventually she settled on the map. Maps have always fascinated Harjo — not only geographic maps, but maps that trace time, genealogy, and give guidance to life. From a young age, she saw words as maps that produced specific sounds and meanings. In the introduction to Living Nations, Living Words, Harjo writes that “[w]e carry many kinds of maps in our poems.”

The interactive website features a map of the United States (deliberately created without political boundaries) with 47 dots, each representing a living poet. Scrolling through the site provides information about Native poetry, geography, and historical developments. Clicking on a dot presents a brief biography of a poet and a link to the Library of Congress site where visitors can listen to the poet reading aloud one of their poems. Each reading is followed by the poet’s personal thoughts on the poem, which they specifically selected for this project. The poems all center on themes of place and displacement, visibility, persistence, resistance, and acknowledgement.

The website ends with an invitation: “Now I urge you to make your own maps. You could include the poets in your particular communities, or you could expand your map to include those poets not living, or those who write solely in languages other than English.” Like the anthology, this map is merely one beginning; from it, Harjo hopes that other projects highlighting the work and traditions of underrepresented poets will follow.

Throughout her success as a poet, Harjo’s family and community responsibilities have always remained a priority. As a student at the University of New Mexico raising two young children by herself, Harjo would write short poems at night while her children slept; the rest of her time was dedicated to school work and caring for her children. Now Harjo enjoys writing in the morning and devotes her afternoons to creating music and fulfilling various community commitments. She feels that making time for her art around her ongoing community and family responsibilities is a challenge she faces as a woman in particular.

Harjo’s perpetual choice to turn outward and focus on the lives of others, from her own children and community to other Native poets, has benefitted countless people. She has used her prominence to raise awareness and increase the visibility of Native writers throughout North America. With her emphasis on inclusivity and diversity, Harjo and her projects challenge traditional standards of aesthetics and expand ideas of verse and form.