When Law and Humanities Intersect

When Law and Humanities Intersect 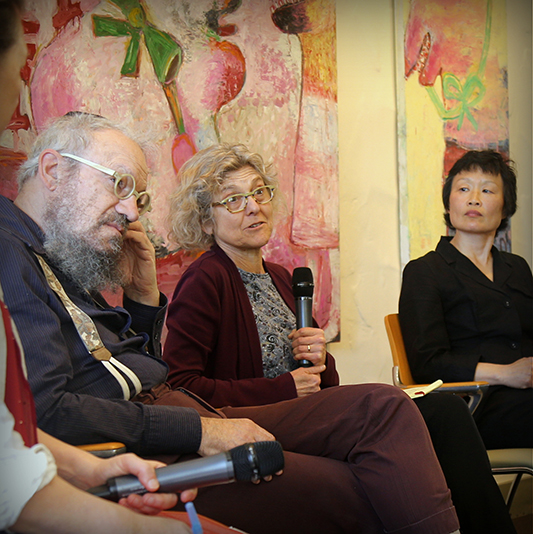 The Book Chat featured six of the book’s contributors – Kathryn Abrams, Daniel Boyarin, Daniel Fisher, Sarah Song, Marianne Constable, and Leti Volpp; Constable and Volpp also coedited the volume, along with Bryan Wagner. Each of the panelists is distinguished in their academic fields, which range from law to anthropology to Near Eastern studies, and the interdisciplinary nature of their collaboration was center stage. The authors discussed the pieces they worked on for this collection, revealing the variety of ways in which one can examine and interrogate law within the humanities.

First, editors Constable and Volpp introduced the collection’s argument. Constable outlined the general claim that law is not just found in law schools, judicial opinions, or other legal settings. Some of the essays in the book make this claim by examining the relationship between law and practices such as kinship or bodily performance. Other essays look at traditional locations of law from different perspectives, such as looking at the Torah through a historical lens and refusing to “engage law on its own terms.” Volpp then introduced the panelists and their contributions, after which each panelist further explained her or his essay to the audience.

Daniel Fisher, a faculty member in the Department of Anthropology, examined Australian night patrols in his essay and argued that “what looks like law might not always be law.” These night patrols act like a policing force, though their authority is granted by communities who seek to maintain independence from the state rather than being granted by the state itself. The night patrols negotiate their own power with aboriginal groups in the area, raising questions about movement, jurisdiction, and urban spaces. Fisher uses his broader anthropological perspective to see law as something that is constantly moving and open to history.

Sarah Song, a political theorist and faculty member at UC Berkeley’s Law School, wrote about the different relationships law prioritizes by taking a close look at Carson McCuller’s novella The Member of the Wedding. In it, Frankie, the tween female protagonist, discovers new ideas of belonging and kinship as she contemplates and then disrupts her brother’s wedding. Song claims that Frankie’s experiences navigating legally and non-legally recognized relationships highlights how The Member of the Wedding argues against the notion of marriage as the measure of relationality. Consequently, Song casts a new light on recent changes to marriage in the legal system, such as the ruling in favor of gay marriage in the 2015 Obergefell v. Hodges decision.

Kathryn Abrams, a professor at UC Berkeley’s Law School, wrote her essay within the context of performance. Her primary subject was a 15 person vigil in the barren Arizona desert held by undocumented immigrants, “who voice emotional anguish as part of a politics of bodily extremity.” Short of citizenship, these immigrants claim a relationship with American law through their performative self-assertion. By highlighting how the immigrants grab public attention to reach political and legal actors such as the president, Abrams hopes to “enlarge what people think of as the [spheres] of law” and legal discourse in terms of who and what is socially recognizable.

Daniel Boyarin, professor of Rhetoric and Near Eastern Studies, argued that the first-century general and writer Josephus would consider the Judean way of life through “nomos” – or law in Greek – instead of through religion. Josephus extends an older meaning of “nomos” and applies it to the Torah, interrogating the current view of the Torah as simply a religious text. Boyarin claimed that categories used to study other cultures – including religion and law – are taken for granted and not seen as the products of particular historical moments. Boyarin therefore wanted to explore a place where law had been fond in the past in order to expose the historical construct of law itself.

This book chat finished with a question and answer session with the audience, in which a variety of contextual and analytical questions about law and the essays were asked. One of the most intriguing questions asked how each author dealt with the procedural form and content of law. Constable answered by saying that she thinks of law as performative, given that law is “done” through language and the act of claiming. Abrams added that law emerges from all kinds of interactions. Boyarin then proposed a follow-up question, asking how Looking for Law in All the Wrong Places interacts with critical legal studies. Abrams, Constable, and Volpp answered that the book has a much broader critical perspective than those of  the past. The breadth of topics explored by these authors is vast, and each essay utilizes new disciplines that may not have been interrogated in conjunction with law before.