Year of the Animal in France

Year of the Animal in France 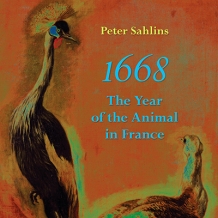 Nearly every Wednesday from 12-1, the Townsend Center hosts a causal lunchtime Book Chat where anyone can come listen to a UC Berkeley faculty member discuss their recent work. The February 21st Book Chat featured Peter Sahlins, a professor in the history department, and his new book 1668: The Year of the Animal in France, which explores shifting French politics, philosophy, and science in relation to the sudden rise in attention given to animals.

Sahlins began the talk by explaining his decision to use a single year, 1668, as the focal point of his project — a striking choice in a field increasingly dominated by “Big History” and an emphasis on longer trends. Sahlins contended that while some scholars believe using such a narrow scope excludes the larger historical narrative, he feels that pinpointing one year, and a single shift in history and thought, can be very effective for understanding broader trends. Sahlins also admitted that the use of a single year was an appealing marketing angle for publishers. But why choose 1668, which Sahlins described as a seemingly insignificant year, devoid of major course-altering events? In fact 1668 was a spectacular year in the history of animals — a so-called “animal moment” in French and European history. Within 18 months, between 1667 and 1668, animals achieved a newfound prominence in aesthetic theory, philosophical debates, medical practices, and even in the gardens of Louis XIV. But after 1668, animals were abruptly devalorized; they shifted from a place of relatively high status and an association with purity and morality, to an association with baser natural instincts. Sahlins seeks to explore this shift from a historical point of view, and 1668 serves his purpose well in his efforts to study what he calls an “epistemic rupture.”

The book was inspired by an interest in what Sahlins calls Renaissance humanimalism. One of its central arguments is that the high status given to animals in France was formative in the growth of Louis XIV’s absolutism, as demonstrated by the exhibition of exotic birds in the Royal Menagerie at the gardens of Versailles. These calm and peaceful birds were seen as modeling civilized behavior for the court. But the quick shift in animal thought after 1668 supported the expansion of the Sun King’s absolutism, which was philosophically justified by a new understanding of human nature as violent and ruthless, and requiring the king’s control.

Sahlins concluded the talk with an amusing story about Louis XIV. The young king was obsessed with animals to the point that he dressed as a rooster, a traditionally insulting term for the French; despite the laughs, he adopted the rooster as his official emblem and made it a point of pride.

Sahlins’s book 1668: The Year of the Animal in France is a thoroughly researched and highly unique book. It provides insight into the development of French identity through the shifting perception of animals in politics, philosophy, and medicine. Through his choice of a single year and his emphasis on the relatively overlooked view of animals, Sahlins reveals important developments in French society.