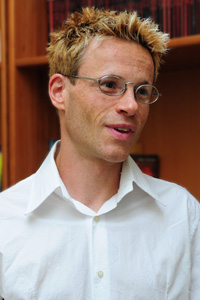 Mont Allen’s dissertation in Art History argues that we have overlooked a central dimension of ancient image making: the communicative power of technique. Historians of ancient art instinctively turn to iconography when considering questions of meaning. But, as Mr. Allen argues in “Facture Speaks: Material, Technique, and Meaning in Ancient Art,” this ignores the fact that Greek and Roman artists were clearly trained to exploit the expressive potential of the materials and techniques at their disposal, manipulating them for their various associations and juxtaposing them as semiotic markers. Beginning with a textual study of the Greek and Latin terms for “technique” and “facture,” Mr. Allen’s project maps out the semantic fields they occupied within ancient speech. “Facture Speaks” then turns to case studies of Attic bilingual vases, the Parthenon Frieze, and late Roman marble relief sarcophagi, revealing a cohesive substratum of ancient attitudes towards art’s production, apprehension, and display that has so far eluded our gaze.