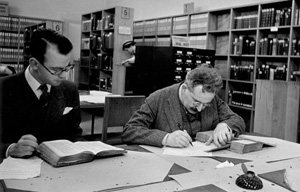 In spring 2005, the Mellon Strategic Working Group in Critical Theory set a goal of designing the Designated Emphasis in Critical Theory. During the semester’s meetings, the participants read from texts that would constitute the course of a future graduate curriculum: Kant, Hegel, Nietzsche, Marx, Adorno, Benjamin, Dussel, Talal Asad, and Paul Gilroy. Participants commented on this body of work and led conversations. From these discussions, the group developed three goals:

In February 2007, the Graduate Division approved the new graduate Designated Emphasis in Critical Theory. Although Critical Theory has had a programmatic presence at UC Irvine, UCLA, and UC Davis, the Berkeley Designated Emphasis is distinct not only for its interdisciplinary faculty, but also for its concern with both the historical formation of practices of critique as well as the contemporary salience of critical theory in a global context.

In October 2007, the Critical Theory Initiative presented a day-long symposium at the Townsend Center.