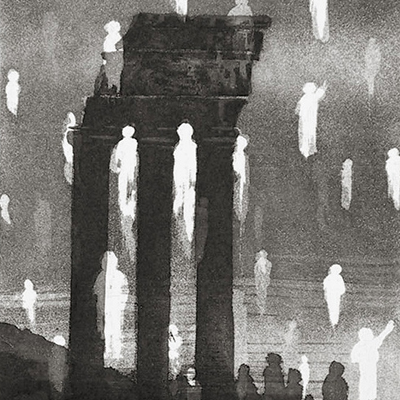 Poet Robert Pinsky and artist Michael Mazur discuss their collaboration in producing, as translator and illustrator, respectively, the most recent translation of Dante’s Inferno. The dialogue turns into a lively consideration of writing, hearing, and seeing texts.

Pinsky and Mazur begin by discussing the history of their involvement, both individually and collectively, with Dante. Mazur in particular relates how he first experienced Dante while living in Florence as an art student in the 1950s. The discussion alternates with passages from the Inferno and the accompanying illustrations, reproduced in whole or in detail in Image and Text.

The two speakers discuss how the processes of illustration and translation often progressed simultaneously for years, sometimes involving deeply appreciative communication between the two, and, sometimes, frank discussions of one another’s attempts to re-render this monumental work in English. The volume includes some of the unpublished illustrations that were not selected for publication in the final volume, and also contains some sources for the monotypes that Mazur produced for this translation. Likewise, Pinsky discusses some of the methods he used to translate the poem, and the qualities of Dante’s poetry that make him both technically interesting and thematically immediate to many generations.

In the open discussion that follows the dialogue, Pinsky discusses in more detail the process by which he became fascinated with the religiosity of Western Christian poetry (Milton and Dante in particular) and how this interest combined with his enthusiasm for the terza rima’s technical complexity to complete the translation—a project that was originally an experiment in poetic rendition.